In this new guide to Solo ads vs. Funnel Clicks vs. Mixed clicks, you will find out which traffic medium is best for you to achieve a higher lead conversion rate and get money back from traffic spent!

If you asked me to give you the top five ways to drive quality traffic to build an email list fast and scale campaigns according to your budget allowance, Solo Advertising would undoubtedly be at the top of the list.

But, before that, all those traffic (solo ads, funnel clicks, and mixed clicks) have some things in common.

The first one is guaranteed clicks.

Whether you buy solo ads clicks, funnel clicks, or mixed clicks, you must receive guaranteed traffic on time. Some vendors may deliver bonus clicks which is usually 10%.

For instance, Udimi is a solo ads directory (in which pricing starts from $0.40) for buyers and sellers where you can buy clicks from a seller and specify the date to receive clicks. Check these Udimi pros and cons to discover more.

The second condition is not guaranteed sales or optins!

Yes, in solo advertising, no matter how you buy traffic, you will not be guaranteed any sales or optins. The ones who do are most probably scamming you! So, stay away from them! If you are looking for a traffic source or method with guaranteed leads or subscriptions, look up CPA marketing.

Solo ads are the most used traffic type of the three. Almost all internet marketers have heard of it.

What are solo ads?

Solo ads traffic originates from emails. Basically, the email list owner (or the solo ad seller) sends a broadcast message to a segment (or all of) his email list and generates clicks to your link.

Some solo ad sellers allow buyers to create the ad text (i.e., email subject line and body text). But some do not.

The seller uses link trackers for solo ad campaigns such as ClickMagick, LinkTrackr, and ClickMeter. Most of those tools have link rotators and features to redirect URLs based on the clicker’s GEO location & link click timing, and a cap of clicks that allows the traffic to direct to a different link after the guaranteed clicks are delivered.

The performance of solo ads

Since Solo advertising is a targeted traffic source, if all things like the email list’s responsiveness, the effectiveness of the solo ads funnel, and the persuasiveness of the email drip campaign are set precisely, solo ads traffic can perform very well.

Overall, the solo ad traffic’s cost would be higher than the other two because of buying traffic directly from the seller.

The cost of solo ads differs from niche to niche, vendor to vendor, and quality and quantity of traffic.

For instance, you might have to pay a little extra for each click if you want to buy traffic from a solo ads customers list (i.e: a list of people who have already bought something before).

Also, some vendors have developed a market where the demand is full, and supply is low (i.e: cannot keep up with daily solo ads campaigns). Since most solo ad sellers cannot provide an exceeded amount of email clicks, the solo ad prices will be higher. It is a basic capitalistic economic principle of supply and demand.

Also, another reason that impacts solo ad pricing is the quality and quantity of email clicks.

Here is a perfect example. Observe the pricing of solo ad clicks proportional to Tiers and quantity of clicks.

Which type of offers works well with solo ads?

It is depended on the traffic quality and the effectiveness of your solo ad funnel as a whole. There is a lot of demand in niches such as Business Opportunities, Make Money Online, PLR, Software products, Freelancing, Cryptocurrencies, and Health & Fitness. If you have an offer related to those niches, you can work with Solo Advertising.

I have recently written a complete guide on How to use Solo ads for Affiliate Marketing. Be sure to check it out if you are looking to use solo ad email clicks to sell other people’s products like ClickBank or Jvzoo offers.

Funnel traffic is the next type of ad. Funnel clicks can be a great traffic source for many offers. But not many people know it!

What is funnel clicks traffic?

As the name hints, the traffic originates from a funnel. The funnel can be a lead funnel, CPA funnel, or even a sales funnel.

How funnel clicks are made?

There are two ways funnel clicks are made.

Some solo ad sellers sell traffic when they build their list themselves. For instance, many solo ads providers buy traffic from other sellers and media buying networks. To get a profit or reduce the cost of traffic buying campaigns, they display a banner or text links on Thank you pages or another page on the funnel.

When a person closes a page in the vendors funnel, the browser redirects to your link.

Here is a squeeze page where the browser alerts visitors with two options: 1) Stay on this page (and check out the original offer) 2) Leave this page to redirect to another freebie offer.

The performance of funnel clicks

The conclusive feature of funnel clicks is the visitor is in a marketing funnel and converted to a subscriber and possibly a customer. Therefore, funnel clicks have higher responsiveness in taking contemporaneous actions such as signing up for your newsletter or even buying your tripwire digital product.

But, because they are on another funnel, the email responsiveness will be low compared with solo ads traffic.

Since the vendor is trying to make extra cash or anything (literally) from already-converted traffic, the cost for funnel clicks traffic will be less expensive than solo ads traffic.

Which type of offers works with funnel clicks?

Unlike solo ad email traffic, funnel clicks are less targeted to your offer. Hence, you will have to fine-tune the product funnel at your end. The offers pitched under the original sales funnel will most likely convert well with this type of traffic. Ex: If the seller’s funnel is about cryptocurrency, an offer about Bitcoin, Ether, or Dogecoin, or a similar digital coin might perform well.

Our final traffic type is Mixed clicks. You will find it is hard to get people who sell mixed clicks, but this type of traffic can be optimum for you!

What is Mixed clicks traffic?

As the name implies, Mixed clicks are a mixture of solo ads clicks and funnel clicks. That means the seller provides a part of the clicks you purchase from a funnel and the rest from email solo ads.

This type of traffic is great for balancing your overall marketing strategy. Because you will get more optins than solo ads (but less responsive) and more responsive than funnel clicks (but fewer optins).

What type of offers work well with Mixed clicks

Well, it is a mixture of both traffic types! 🙂

Solo Ads vs Funnel Clicks vs Mixed Clicks: Which traffic type is best?

So, now you have some idea about solo ads, funnel clicks, and mixed clicks traffic.

There is not a thing called the best traffic source or channel for your offer. Each of them has its advantages and disadvantages. The key is having a strong sales funnel for email traffic and choosing the vendor wisely.

Here is a list of sites to buy solo ads traffic. Digest all ways to buy traffic and do A/B testing solo ads vs. funnel clicks vs. mixed clicks to find the highest converting traffic type for your offer.

If you learned one thing from this article on solo ads vs. funnel clicks vs. mixed clicks, it is that every visitor counts! Unlike other advertising methods such as push notifications, email traffic is a high-quality referral traffic source.

So, here are some recommended tools to get a higher ROA (Return on Adspent) and ROI (Return on Investment) from your campaigns.

Also, I recommend using Anyword to generate click-worthy email subject lines to get ahead of the competition when buying solo ads, funnel clicks, or mixed clicks. Read this Anyword review to learn more. Additionally, I recommend using a live countdown email timer in your funnels to stand out from others.

Also, make sure to clean your email list from time to time with one of these email list cleaning tools to ensure leads are responsive and not fake.

Because, it is possible to get more fake email addresses when buying solo ads clicks, funnel clicks, or mixed clicks.

Related: How to become a great solo ad seller: The beginner’s guide

So, what is your verdict on solo ads vs. funnel clicks vs. mixed clicks traffic types? Share your opinions in the comments below. 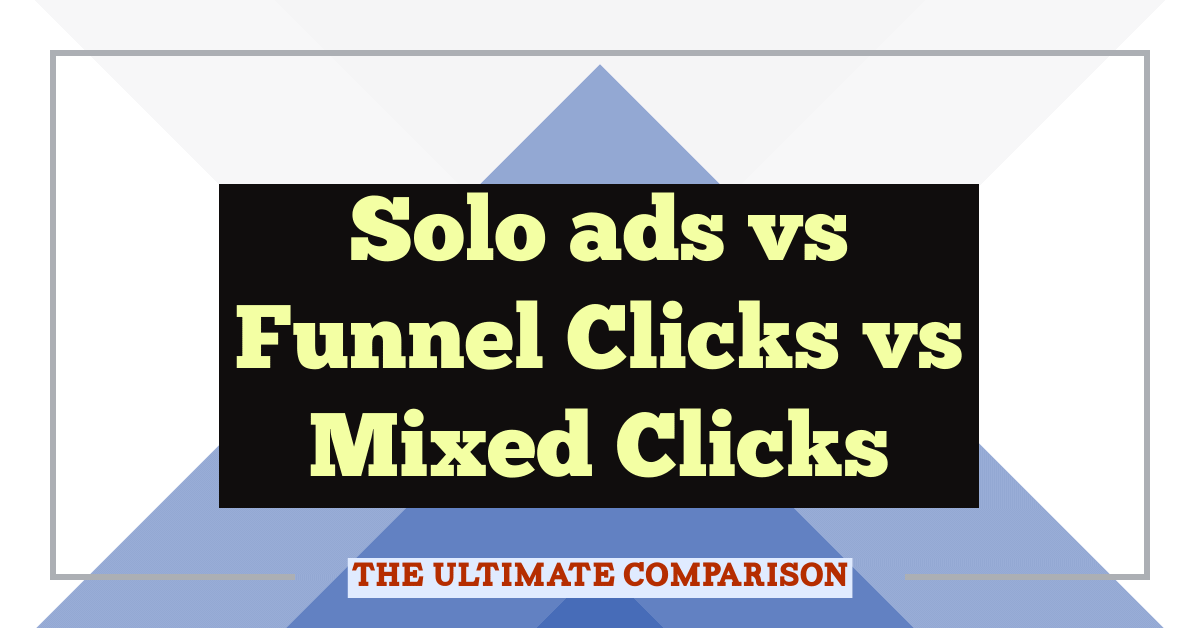