In this Integrately review, you will find out how Integrately can help you and details about a free lifetime deal and giveaway!

Have you ever been looking for a good alternative to Zapier?

Or even wanted a cost-free or a low-cost solution to automate your task workflow?

That is where Integrately comes in to help you out.

Integrately is a tool like Zapier and Integromat. It helps you integrate apps in one click and automate your task workflow very easily.

Integrately is one of few task automation and app integration tools. In this review on Integrately, you will find out why you should use Integrately, pros & cons, and more!

What does Integrately do?

Integrately helps you integrate different apps, tools, and services you already have to automate your workflow.

Here are a few things you can accomplish with Integrately

In fact, the sky is the limit with a tool kind of Integrately.

There are over 600 apps already integrated with Integrately.

Who are behind Integrately?

Integrately is a fairly new tool in the market. But the team behind it isn’t!

Since the start of Integrately, Abhishek, who is the founder and team, rapidly added new features and new integrations. They are working on making it an integration powerhouse. I was one of the early adopters and used Integrately instead of Zapier, Integromat, Pabbly Connect, and PieSync.

How to use Integrately

It is quite easy to Integrately, frankly. You would normally expect automation workflow tools like these to be complicated and harder to get started. But, one fascinating feature behind Integrately is 1-click integrations.

That means you do not have to be a professional to work with your existing tools. There are over 8,000,000 1-click integrations in the Integration Store.

Those 1-Click integration recipes will not only make your life but also give you new ideas to use your existing tools in new ways that you didn’t think of!

When Form is submitted in Convertful > Verify the email address in NeverBounce > (If email is valid) > Register user for the webinar in BigMarker > Create spreadsheet row in Google Sheets.

In this review of Integrately, I will show you how to use Integrately shortly.

Once logged in, you will be redirected to the Dashboard.

In the first step, you will have to select apps that you want to automate.

For example, I will select GrowSurf and Gist. Both don’t have a direct integration between them. Hence, I would like to send all GrowSurf data to Gist.

As you can see in the screenshot above, there is already a 1-Click automation recipe. But, if you want to add more conditions or more apps, you can do it in the first step.

Integrately is a flexible automation software for your business. The automation isn’t fixed. You can create your own automation for your needs in case there is not any 1-Click automation.

It is similar to IFTTT, where you will have to select two apps to act to do something when one thing happens.

Apart from sending the contacts’ data from GrowSurf to Gist via Integrately, there are also numerous things I can accomplish.

These are very powerful integration options that you can accomplish by using Integrately.

Select the 1-Click automation recipe or create your own to move forward.

You would see an editor slightly similar to the one shown in the screenshot below.

On this page, you can do many things:

For the API to work properly, Integrately would have to look for new information regularly. The time gap between two checks is also known as the Polling time. Hence, the shorter the polling time, the better for you and your campaigns.

API is cost-heavy because for this reason; Polling time.

Many popular applications already have API. For an app to be directly integrated with Integrately, it should have the OpenAPI.

Webhook is another way of integrating apps with Integrately. Unlike API, Webhook is cost-effective because it doesn’t have to check for data every once in a while.

In essence, the actions are made as soon as data is transferred via Webook or Callback. Therefore, the overall process of Webhooks is instantaneous.

Since Integrately supports both methods, you will have all the power to make your automation work as you want.

Do you want to make your automation work as soon as possible? Choose Webhooks method.

Do you want to do some advanced stuff with your tools? Choose API.

Want to accomplish both of the above? Use both two! 😀

Connect apps through Webhooks to Integrately

Integrately shows all the steps you need to follow to integrate your apps.

To enable the integration via webhooks, you will have to paste the provided Webhook URL and send a test record.

Select the test data type and send the record to Integrately.

Once sent, tick the checkbox with “I have sent a test record after setting URL” and click the “Test Connection” button.

Now you will revert back to the workflow editor page and see the test data.

Connect apps through API to Integrately

This is quite easy as the webhook integration method.

Integrately will pull off data fields available via the API connection. The next step is customizing data.

In this step, we are going to define Integrately which data is relevant for which fields.

Select the data field you want to map data and choose appropriate data values from the test record. See the screenshot below as an example.

Integrately allows you to modify data in quite different ways.

For example, if you want to make the full name of a person title case while sending data from your form builder to autoresponder, you can easily automate this.

Ex: Instead of ‘steve smith,’ your autoresponder will receive “Steve Smith” as the record of the Name field.

Here are a few more examples you can do with data modification in Integrately.

Here’s an example of changing the data format from Unix to normal in Integrately.

Once the data points are located correctly, the next step is conditions and actions modification.

Want to qualify data so that the only ones you wanted will be sent out?

In this step, you will be able to add other apps and conditions to the automation (Zap).

For example, according to the settings below, if the lead’s referral count is above 5, the data will be stored in a Google Spreadsheet.

Your creativity and needs are the only limits here. Once everything is done, click on the “Test and Go Live” button to proceed to the last step.

The last step is saving your automation.

You can save the automation in two folders.

Now you know how you can use Integrately to build a task automation workflow. It is easy. Isn’t it?

Although Integrately is a new tool, it has got awesome features. I will share some of them in this review on Integrately.

Sometimes your apps might be down, and APIs might not work as they are supposed to be. How would you know errors and data transfer issues? Thanks to Integrately’s History feature, now you can see which tasks failed and fix the issues.

As you could see in the screenshot below, Integtately lists all automation tasks that were successful and failed to execute.

One cool feature of Integrately is the ability to share automation recipes, among others. So, if you want to share a specific workflow with your agency’s client or customers, you have to build the automation yourself and make it shareable.

Integrately Automation Store is an excellent place to get inspired on how to use the existing tools that you might not have used to their true potentials.

Integrately team is adding 1-Click automations at a rapid pace. Currently, there are over 8,000,000 recipes for over 600 tools. In a year or two, these numbers will be grown exponentially.

If you run an agency for digital marketing and want to give someone access to Integrately, there is the Sub Accounts feature. Similarly, you can collaborate with your team, co-workers and use Integrately extensively to grow your business.

The pricing of Integrately is cheaper compared with Zapier. Refer to the screenshot below.

To learn more about Integrately pricing, comparisons with plans competitors such as Zapier, read this article.

Is Integrately worth it?

Although Integrately is a new automation workflow tool, it has gathered lots of attention from marketers and entrepreneurs worldwide.

Also, it became the highest-rated integration platform in the G2.

So, should you use Integrately? Is it worth it?

You should give Integrately a try.

Their pricing is 18 times less expensive than Zapier, and they are giving more tasks than Zapier in every subscription, even in the free!

Although there are millions of different apps out there, only a handful of integration platforms are there for you.

In the current environment, having an app integration tool in your arsenal is a must not just to connect each other apps and ease your marketing campaigns but also to manage data in a way that you can handle to compete with your competition.

In this Integrately review article, I tried to explain how this tool can make your life easier and make your business grow.

I have been using it since it was started and also saw how it grew rapidly. I am happy that I got access to Integrately. Now you can sign up to Integrately for free and get up to 6,000 (or 9,000) tasks per month for life!

So, what are your opinions on Integrately? Can It replace Zapier? Share your reviews below.

Integrately’s one-click automation store, history, and outgoing webhooks make working with multiple apps easier than ever before. If you were looking for a good alternative to Zapier not only to save money but also to improve your day-to-day workflow, give Integrately a try. 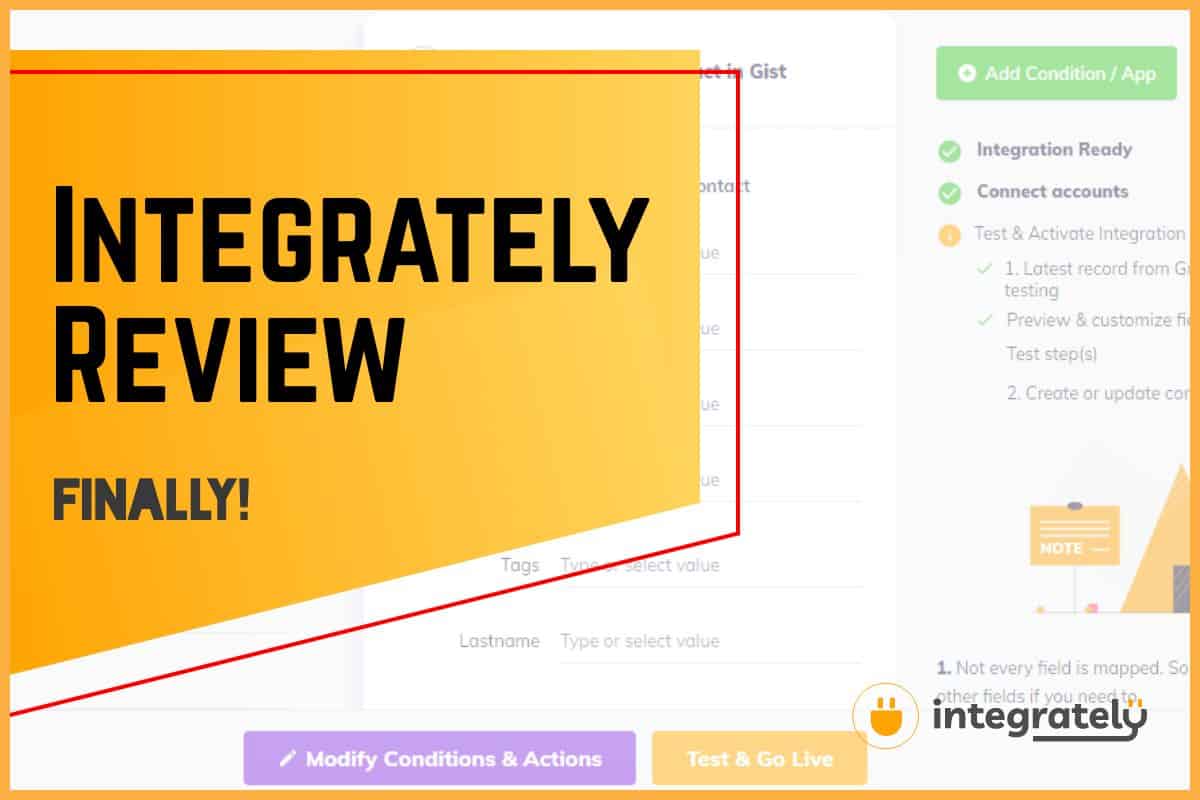